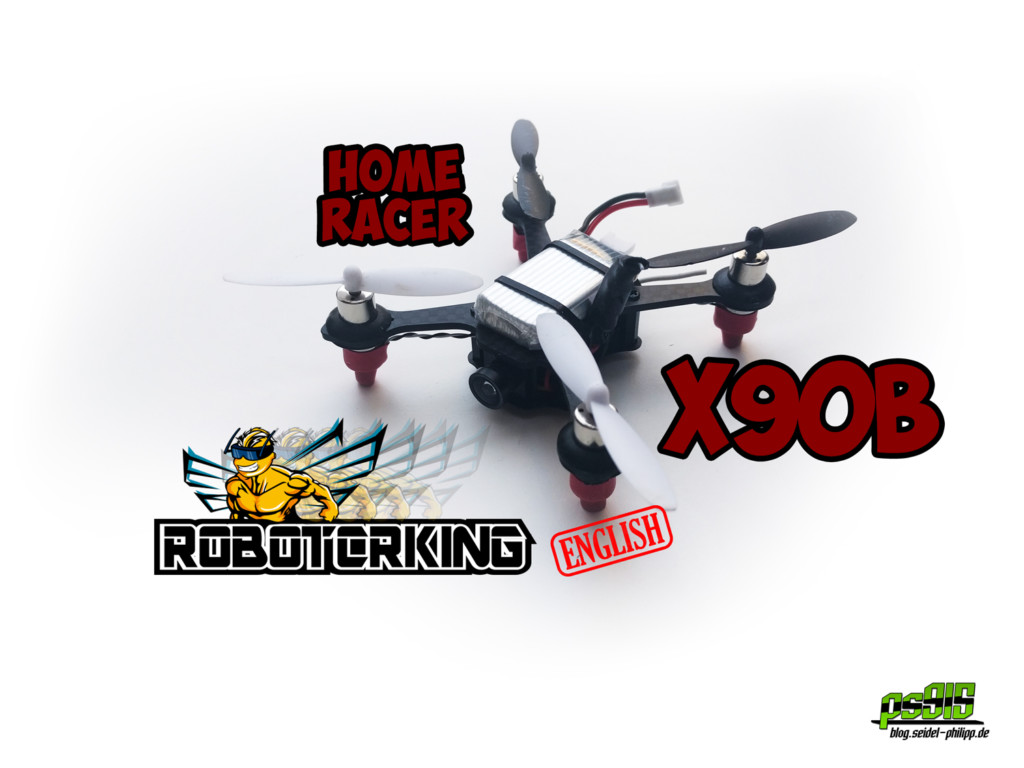 In this review, I would like to introduce you to the new Brushed Racer X90B from Amax. This was kindly provided by Amax for this review. At the very least I would like to offer you an objective review, except from my subjective impressions of the last days, in which I took the little racer a little closer.

For those of you who prefer the „tower“-construction, there is the X90T, which is largely equal to the X90B of its components.

There are the following versions with receivers:

The following components are included: 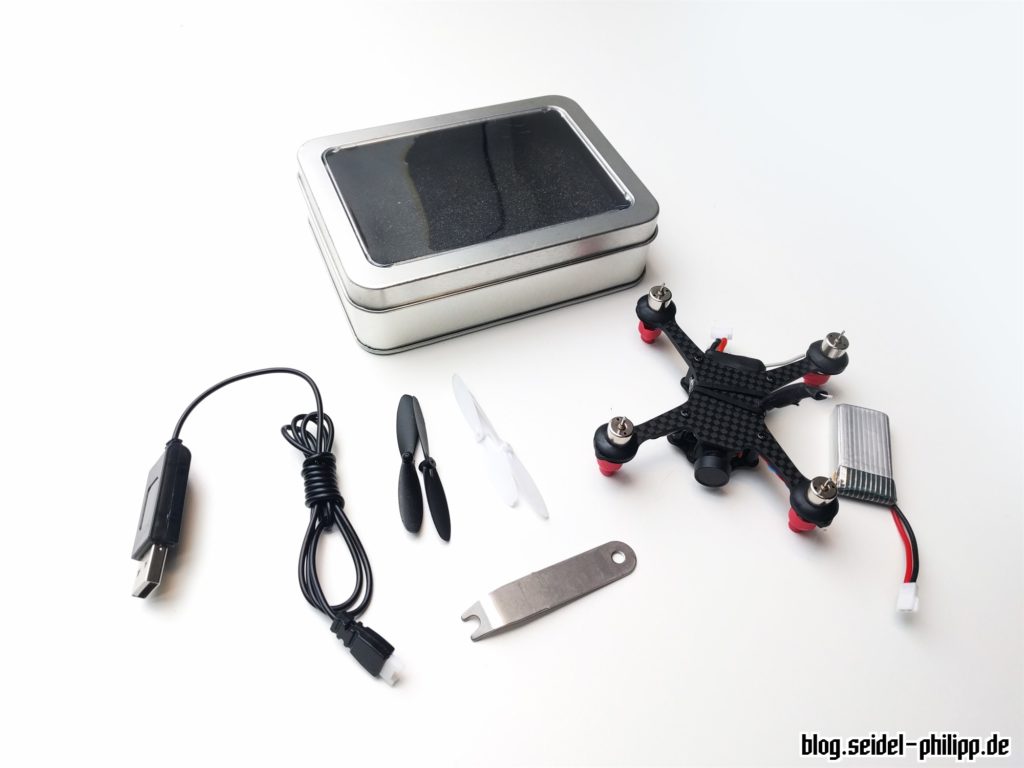 Two carbon plates are used as the frame, which have been precisely adapted to the requirements of the quads. The upper plate forms the main frame and consists of 2 mm thick carbon. In this, a small recess is milled in the underside, in which the FPV camera is arrested and thereby sits optimally in the frame without further holders.

The lower plate is milled from 0.4 mm thick carbon and has both, a milled slot, also for holding the camera, as well as a small hole through which the button for switching the VTX channels can be reached.

Four brushed motors with a diameter of 8.5 mm and a length of 20 mm are installed. These generate, according to my feeling, in connection with the enclosed 60 mm propellers a very good thrust. 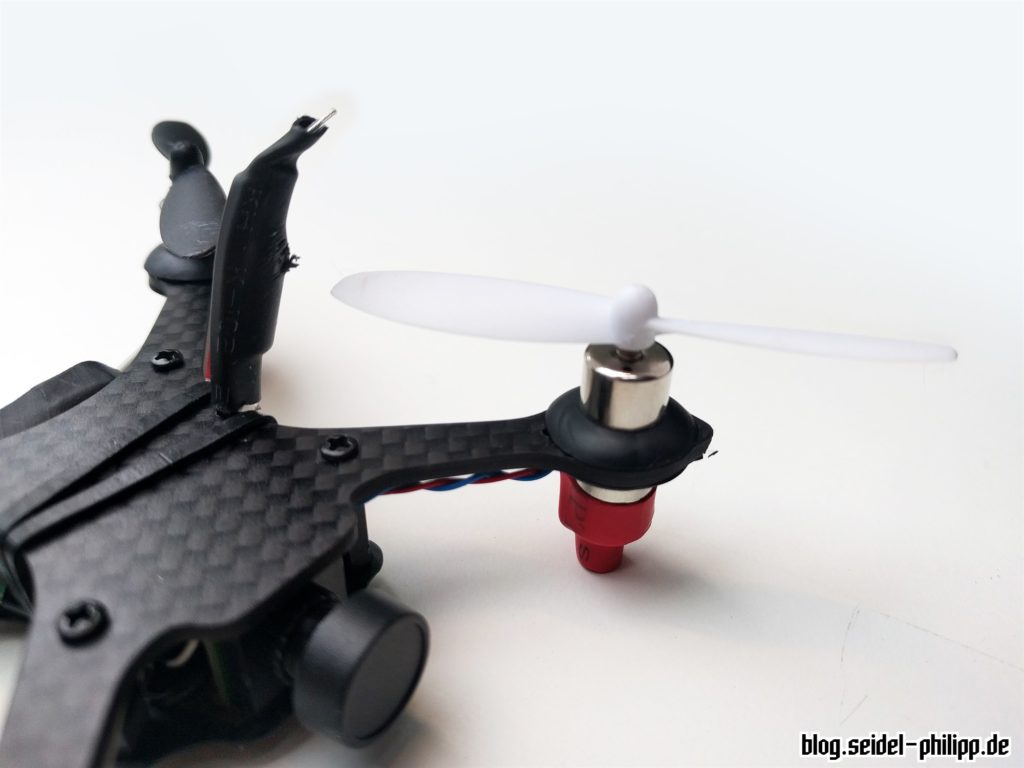 A SP RACING F3 EVO BRUSHED is used. In my opinion, a great choice as it allows you to freely adjust many different configurations (including PIDs and RATEs). The micro-USB interface is located at the rear end. The X90B is delivered with Betaflight 3.0.1, which can then be quickly and easily adjusted via the Betaflight Configurator (Google Chrome App).

By using the SP RACING board, it is also possible, as with other boards, to activate the AIRMODE, which almost invites to freestyle flying. Furthermore, it gives the entire flight behavior more stability, as the copter does not tip away at zero gas and falls to the ground like a stone. 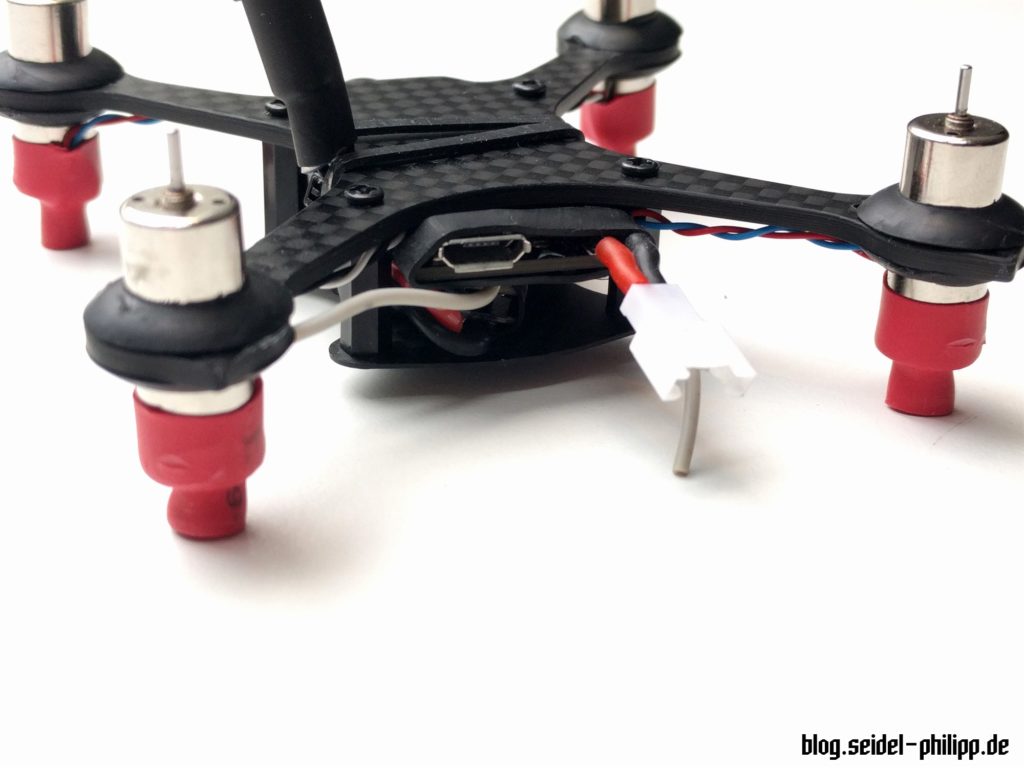 A combination of VTX and camera is installed. The transmitter offers 16 channels at a power of 25 mW. As already mentioned above, the channels can be arbitrarily adjusted by the small hole in the lower plate. 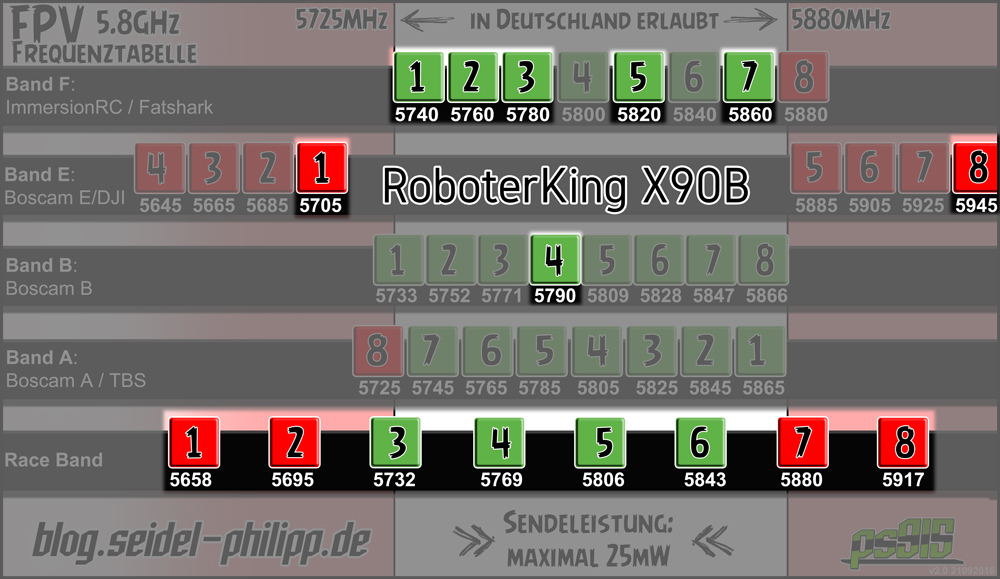 The VTX antenna is a conventional dipole antenna. This offers the advantage that, unlike a Cloverleaf antenna, it is more robust. A disadvantage could be the transmission power of the antenna objection in which area a Cloverleaf antenna has a better transmitting power and thereby a cleaner image generated. With the available antenna I personally, however, nothing to objection. There is no problem at all in the image quality when flying through a house with three storeys.

The camera is very small and reminds strongly of the mini camera of Banggood. It has a resolution of 600 TV lines (TVL) and has a CMOS chip. This despite its bad reputation as a FPV camera  and works very good with great colors and contrasts. Usually with CMOS chips the changeover from light to dark is somewhat sluggish, which I could not determine with this model however. From the apartment out into the bright garden represented for me no problem.

Since the wide angle of the small camera already has a difference from that of e.g. Runcam PZ0420M with 2.8 mm lens, it could be that at first slight difficulties with the correct feeling of space occur. However, this is relatively fast. 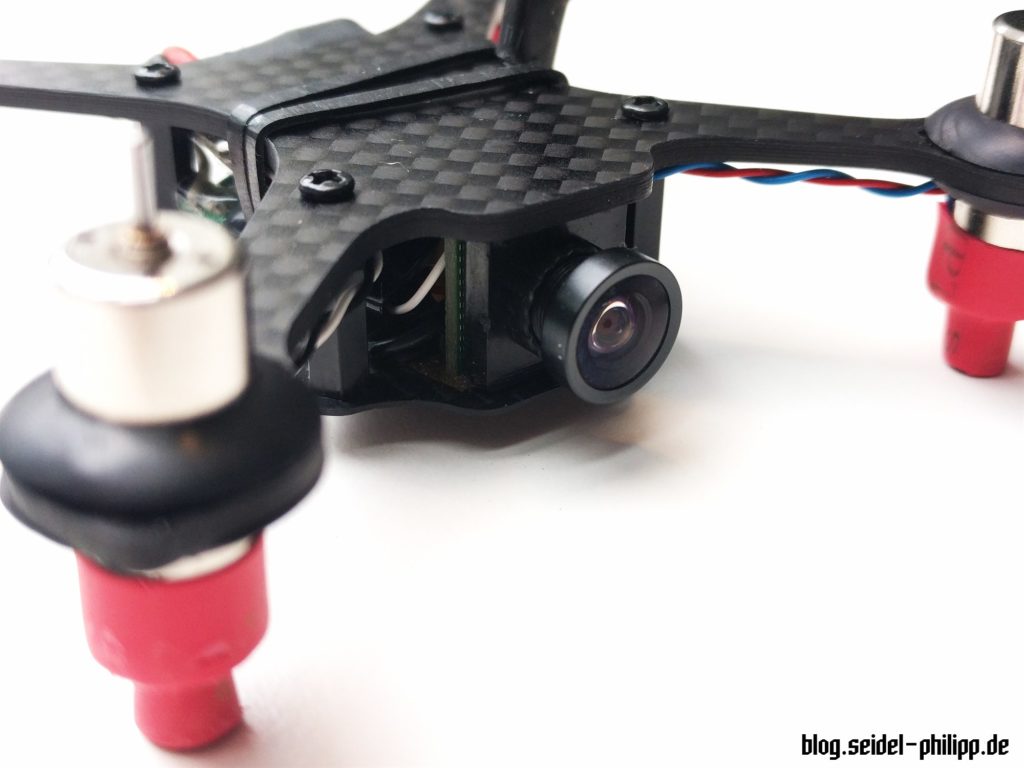 The included USB charger charges the LiPos, for example, on the PC or on the hand-held power adapter. A red LED symbolizes the charging process. As soon as this goes out, the LiPo is fully charged. The charger is also available separately, which allows several lipos to be loaded simultaneously, for example, on a Powerbank. 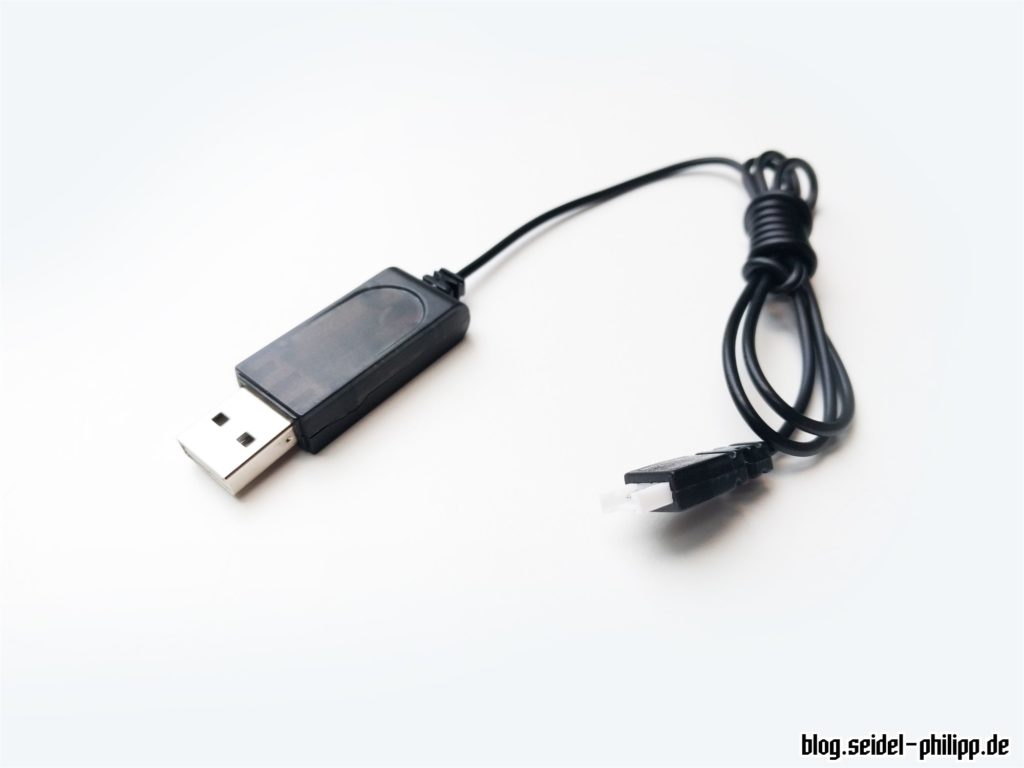 The landing feet consist of shrinking tube. After careful consideration, this was the best solution. They are light, have a damping effect when landing and can be easily imitated in case of loss or damage and thus be renewed.

Thanks to Eddy Eagle for your DVR recording!

The X90B is not just a quad for in the house or in other buildings. Even in the outdoors he prepared me a lot of fun in the past days. Especially by the super video reception, which also remained stable at some distance and behind different objects (bushes, walls). Due to its low take-off weight of just 52 g, my crashs has not been significant. The propellers also hold a lot and have not bent so far. With the stock PIDs and RATEs, it can be controlled very well, but the RATEs can be increased somewhat, depending on the taste, so that the flipping is a bit faster. So it is then also possible to fly in the apartment a little Acro, which is a lot of fun and after some exercise also works well.

Since it is at the discretion of each individual how many LiPos are needed and how they are loaded, the purchase of a multiple loader is not an improvement suggestion, which is why I mention this here.
Since the possibility is however very good to find several LiPos at the same time and not always have to wait for the next load, I would like to recommend you this multiple charger, on which up to six LiPos at the same time can be loaded.

I really did not have any real improvement suggestions. It can be argued whether a detachable protection around the propellers would be a nice additional gimmick, however, this is clearly not a copter for beginners. This does not mean that you can’t adjust it so that it could be flown by beginners.

Even if I fly the X90B in the Acro mode, I have quickly drawn a cover and printed it, to make me a little familiar with the matter, but just for the beginning 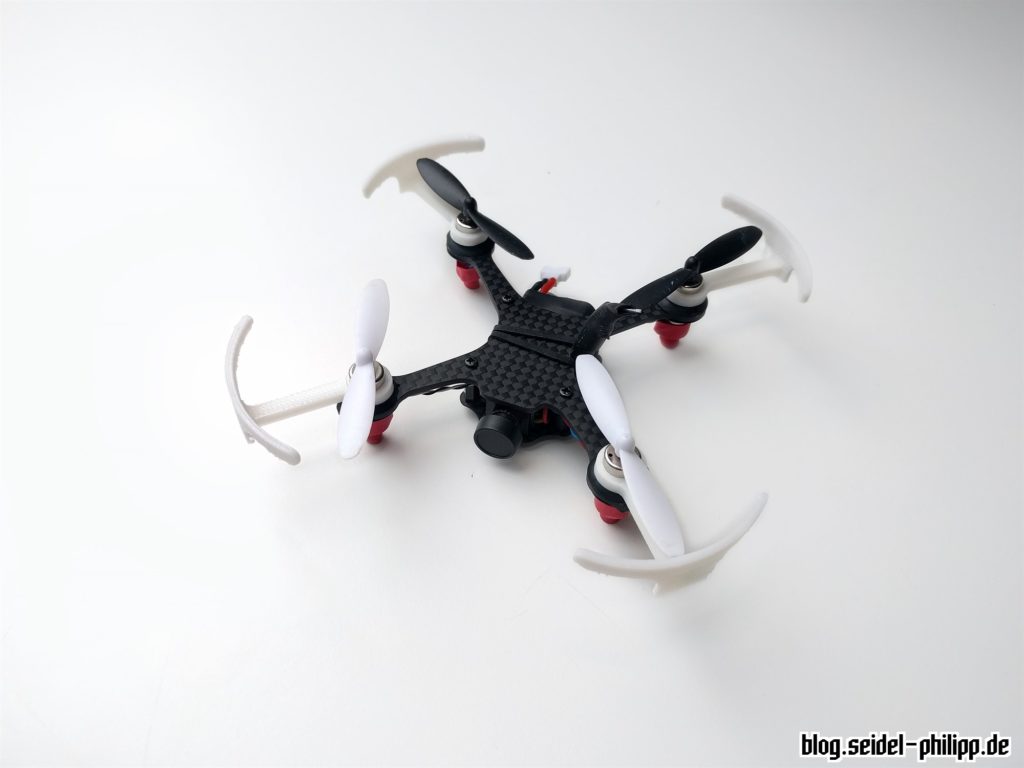 I would be happy to provide you with this print 🙂

UPDATE: There is now also a propeller protection at Amax.

16 channels are no longer state of the art. Usually, today’s transmitters have 40 channels and more. This is, however, faulty at a high level. If you are not in a hall with several people flying, the 16 channels are enough, in my opinion. Everything else would raise the total price again.