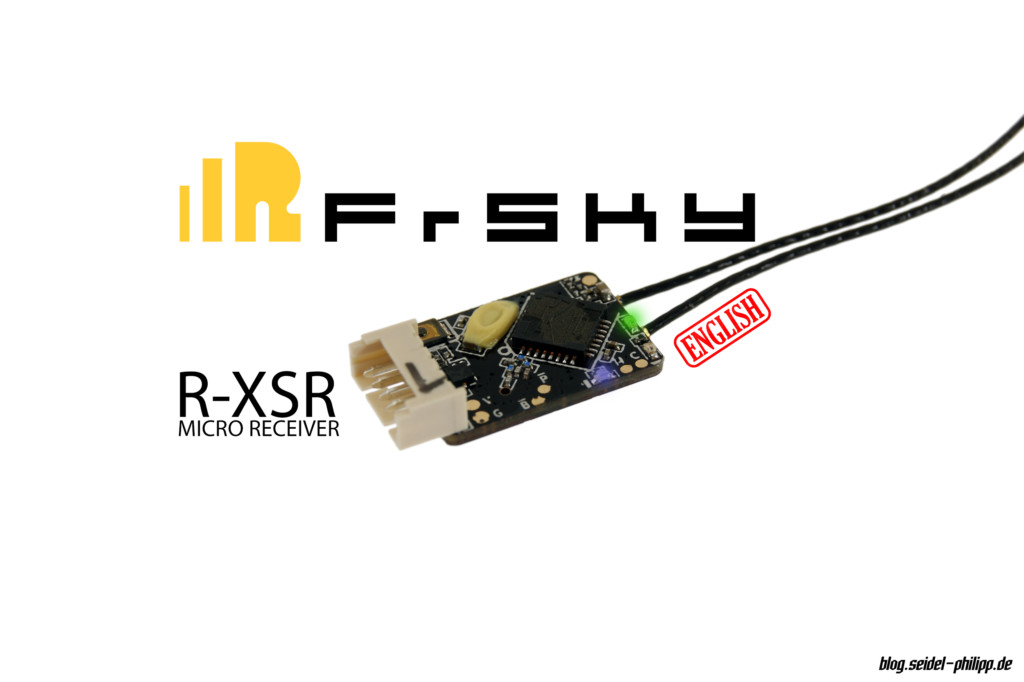 The FrSKY R-XSR is a new small receiver with which has the same functions as an ordinary XSR and is supposed to be „full range“. New is the redundancy function. The R-XSR receivers were sponsored to me by the online shop  www.premium-modellbau.de. In the new FPV Area you will find more interesting products for FPV Racing.

Note: You can flash both models to EU/NonEu. Its explained later in this article.

This following picture shows how small the R-XSR is compared to other receivers. 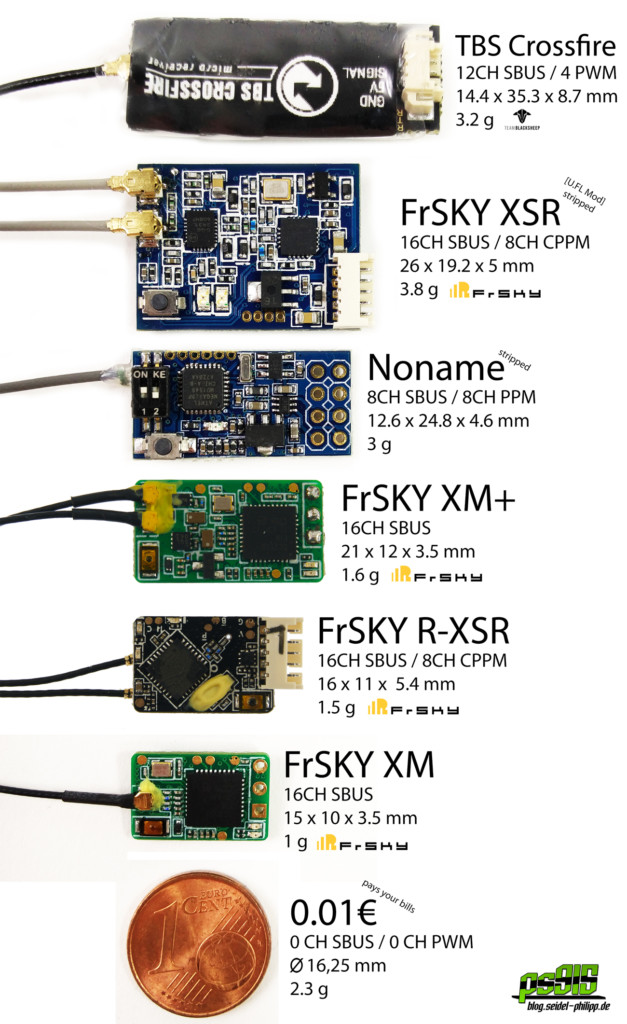 If you desolder the socket and solder the cables directly on the bottom, you can make the receiver significantly flatter. Since the pads are quite large, this is relatively easy to do.

The firmware (EU / Non-EU) can be found in the download area of the FrSky page.

In the first batch, the firmware was faulty so the telemetry function worked not correct. For that reason, for example, the LUA script in conjunction with the KISS FC did not work correctly. For this reason, you should in any case perform a firmware update. You need at least firmware version 171009.

The firmware update can be done with a Taranis 9XD or QX7/S in the same way as described in this manual: Flash the FrSky SmartPort receiver

Unfortunately, FrSky has not learned from the past and so the antenna problem still exists, or it has become worse (but later more).
A discussion with FrSky is lost time, since they do not listen their customers, which is a pity, because as good as the receivers of FrSky are, there is still room for improvement.

Let’s get to the antennas. These, like the antennas of the XSR, have an incorrect length of the stripped / active antenna part. This means that the full range, under certain circumstances, can not be achieved. The length of the antenna measures 23mm, which is 1/5 (actually 1 / 5.4) of the wavelength (2.4GHz).
The correct wavelength would be 1/4, which is 31mm. Nevertheless, the missing 8mm can be stripped in self-work. Mostly i fly the stock antennas or I equip the receiver with new antennas of the correct length.
A further disadvantage of the antennas is that they are now even thinner than before, which means that they are thus even more susceptible to mechanical loads like prop strikes.

Attention: I would be greatly surprised if FrSky had simply changed the antenna length without thinking about it.
Although there is no official statement from FrSky, but a reason could be that the receivers are optimized to this antenna length and work with the original antennas just as well.
Personally, I leave the antennas in the original state, but everyone has to know for himself whether he still stripping the remaining piece or not.
So far i had no negative experiences with the original antenna.

A further step back in my opinion are the antenna connection sockets. They were changed from U.FL to Micro U.FL, which is an even smaller plug.
This leads to the fact that you have to have both antenna variants as a spare part in stock, if you do not want to completely change to the R-XSR.

Silicone? Yes, finally! FrSky has finally given in to the customer’s request and the receiver is delivered with silicone cables. THANK YOU FrSky!

Whether an inverted SmartPort / SBUS signal is needed or not belongs to which flight controller (F3 / F4 chip) you used. With previous receivers, the right signal had to be intercepted on small SMD components in order to be able to use the receiver at all.
With the R-XSR, FrSky has recognized the problem and found a satisfactory solution. There are tiny solder pads where you can tap both signals (SmartPort / SBUS). 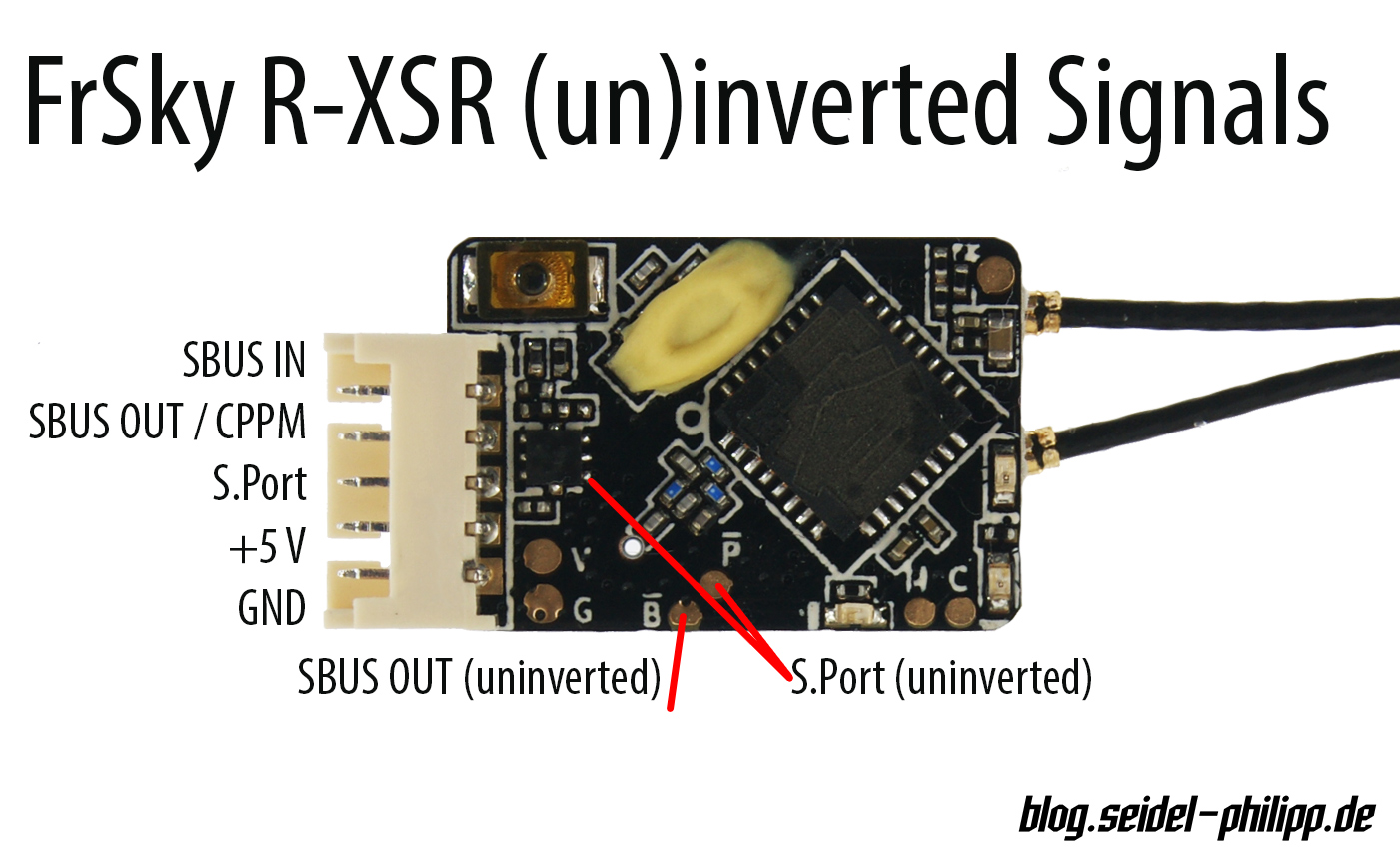 The optimal solution, however, would be two soldering bridges, which can be bridged, depending on which signal is required. Thus each one could receive his „desired signal“.
On the basis of the extremely small PCB of the R-XSR, however, I can understand that under certain circumstances there is less space for that

Please note that some „inverted“ and „un-inverted“ are interchanged or the contrary is meant, depending on the view (FC or receiver) you see it. Here is a statement from FrSky 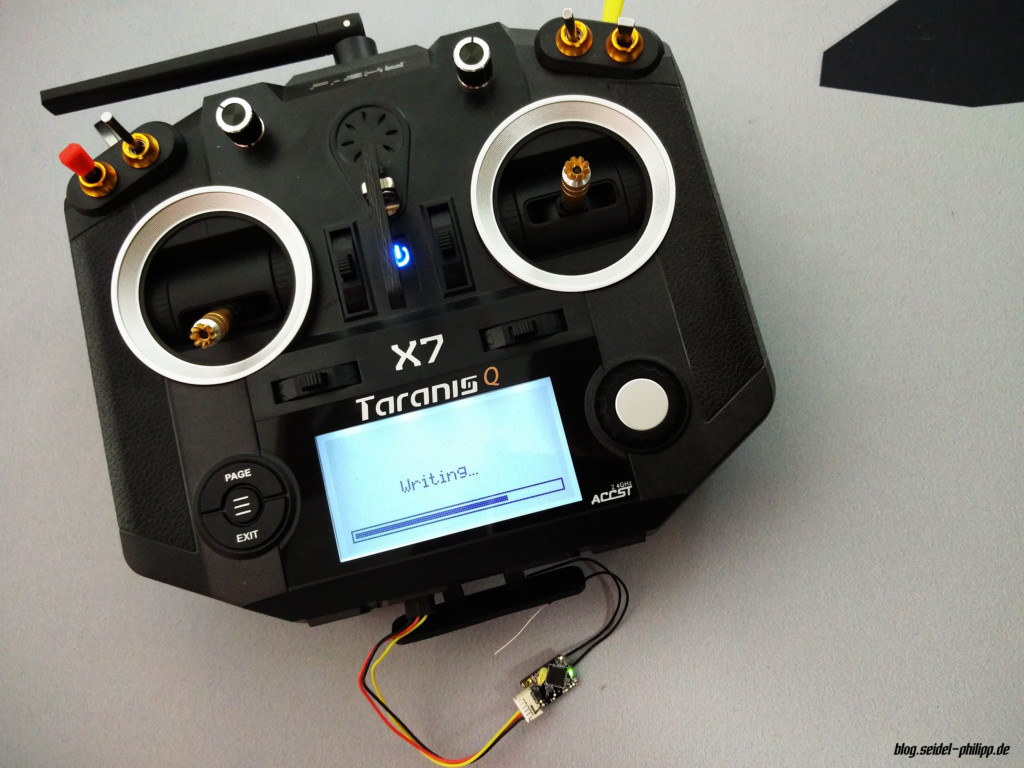 The new redundancy function allows the combination of two receivers to get a more secure connection. This function is less interesting for FPV Racing Quads, but for larger models such as airplanes.
The master receiver is the R-XSR. A second receiver, the slave receiver, is connected to the SBUS-In connector of the R-XSR.
Both receivers simultaneously receive the commands of the transmitter module of the remote control. If a receiver loses the signal during the flight, the second receiver is automatically switched over when it still receives a signal.

Possible slave receivers are, for example: X8R, X6R, G-RX8, X4RSB, XSR, XM, XM+, R-XSR, L9R, etc.) The telemetry function must be deactivated for a slave receiver from the X series. 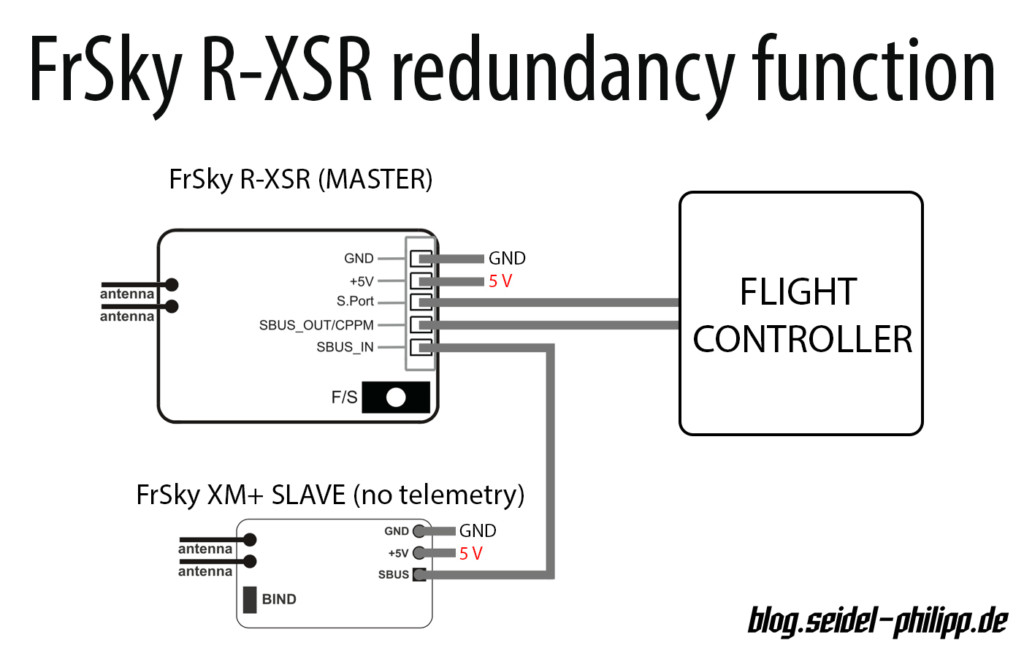 In the following picture, two receivers are connected to each other. To use the redundancy function, you must bind both receivers in the same model to the same receiver ID.
Originally, I want to tie two R-XSRs together, With the latest firmware (internal XJT module as well as OpenTX 2.2) it should be possible to bind a receiver without telemetry. To do this, the „Build Options“ must be set at „bindopt“ before the taranis flash. 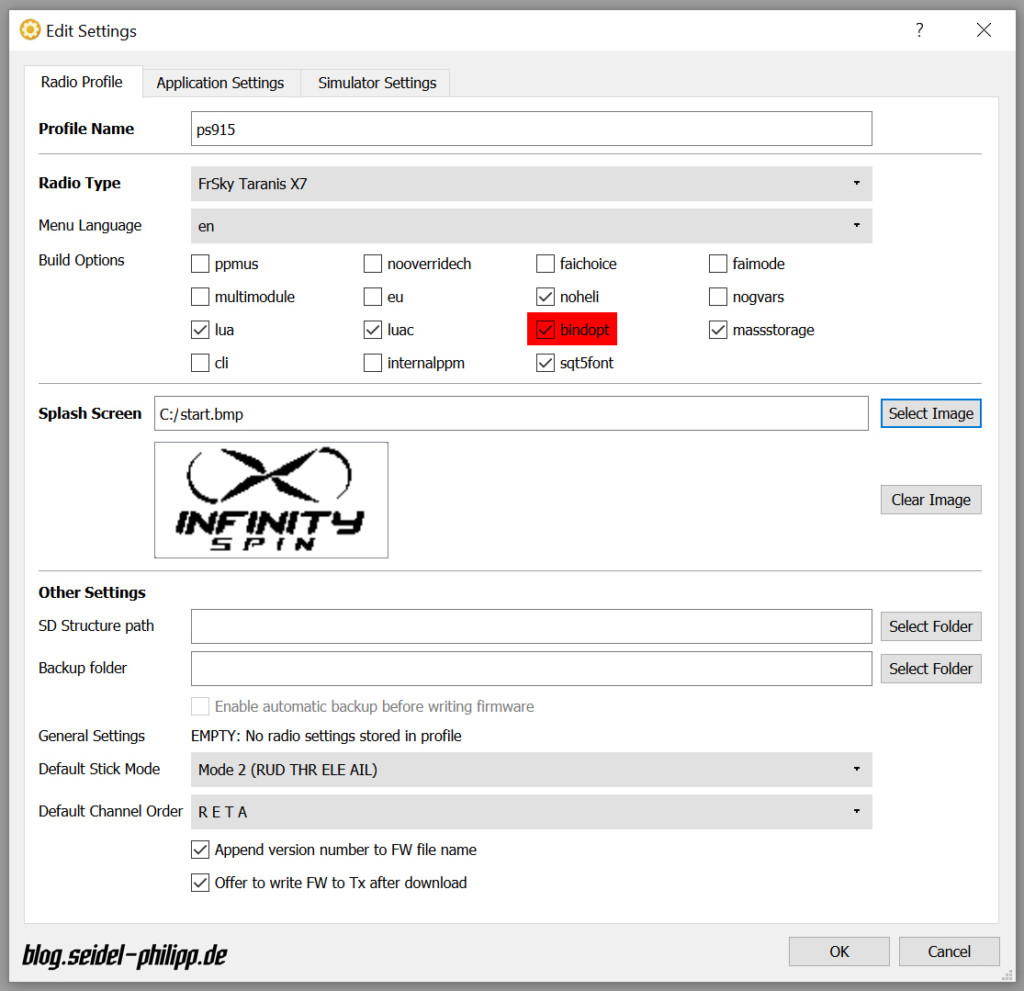 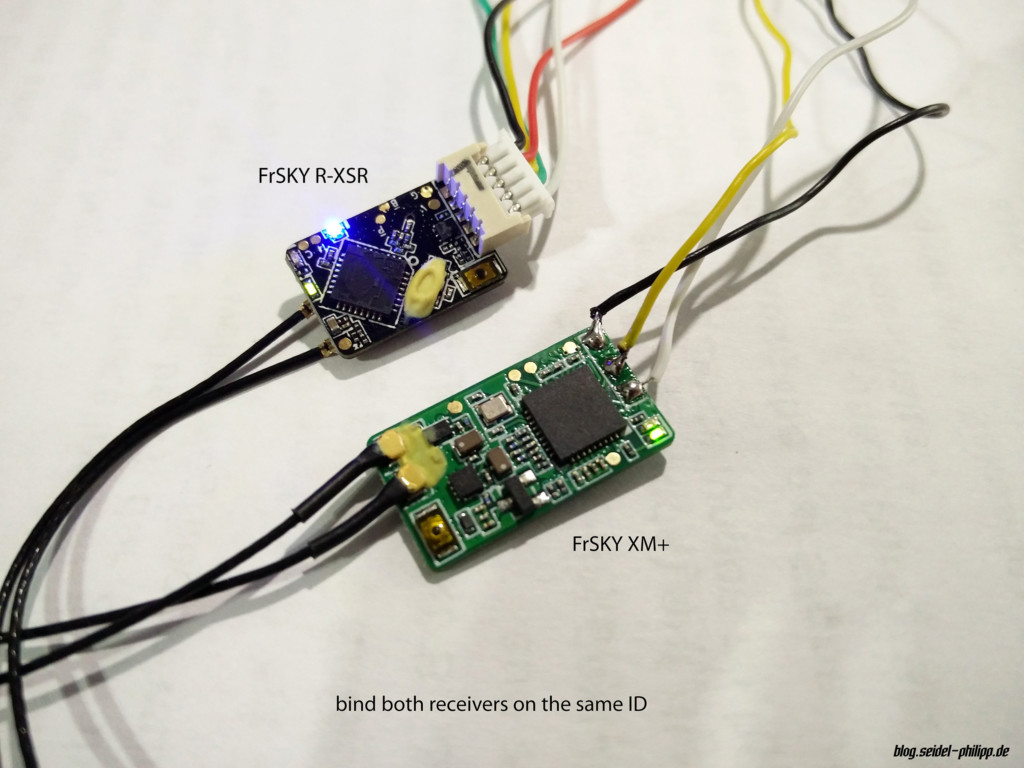